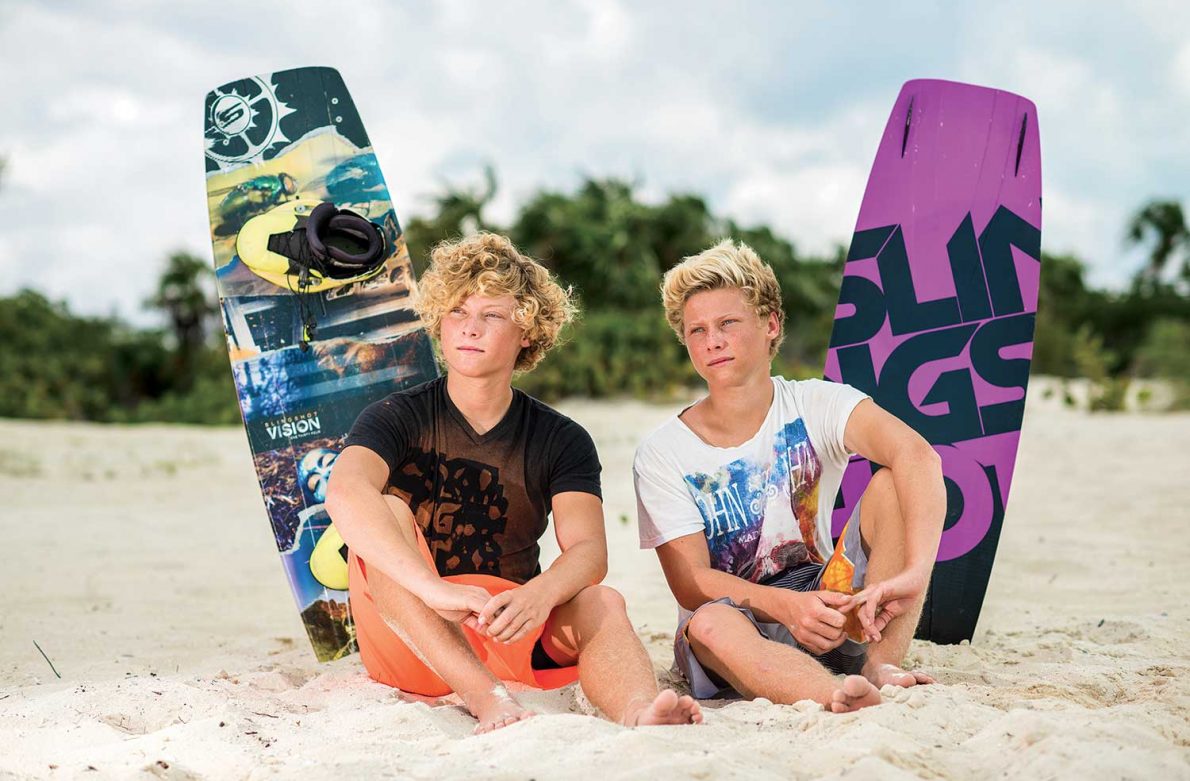 Once upon a time there were two normal kids who grew up doing normal kid stuff: Playing hockey, practicing karate, flying kiteboards…

OK, maybe those aren’t exactly normal kid activities elsewhere. Maybe they’re only normal on Providenciales, where a uniquely blended culture drawn from the traditions of Islanders and settlers makes life so surpris­ing and colorful. As a place to raise children, Provo can border on the idyllic.

Take kiteboarding. Turks & Caicos of­fers some of the planet’s best conditions, couples that with a patchwork playground of mangrove islands, then centers it on a world-class beach destination that attracts luxury-minded outdoor adventurers from around the globe. That fortunate combina­tion creates a rare opportunity for young people to advance rapidly within the sport – all without leaving their hometown.

Yet that’s exactly what two twin teenage brothers did last fall, giving up happy lives on Provo to travel across North America and begin their studies at the World Class Kiteboarding Academy, an itinerant board­ing school headquartered in Hood River, Oregon.

You might imagine that it wouldn’t be easy to recruit your parents to an idea like that, and it wasn’t. But ironically it was their father — Provo attorney Peter Karam — who originally told his 15-year-old sons Sean and Liam about the program.

The twins grew up on Provo, a community that values keeping kids active. They’re certi­fied in scuba and sailing, and were active in hockey and karate until they followed their friends into kiteboarding. They took some lessons, and just like that, the sport became the focus of their lives. “It was what we did on island,” they said. “It was a great way to hang out together.”

As the family began to turn its attention to planning for the 10th graders’ future, “Our dad had mentioned he was researching schools in places that were close to kiting,” Sean said. “Schools where we could kite at the same time.”

That’s when Karam came across the World Class Kiteboarding Academy. “He thought it was a cool idea, but I don’t think he was planning on sending us there.”
However, the idea planted a seed. Later that summer their mom, Johanne Karam, phoned the academy to ask about possibly enrolling them the following year. The direc­tor told her it wasn’t too late to sign them up for the current academic year.

“We were next to my mom when she was on the phone and overheard everything,” the boys said. “We were in the background saying: ‘Say yes, say yes!’”

“It is what they wanted to do, it is their pas­sion,” said Johanne.

So off they went. The academy’s intensive curriculum prepares students for college ca­reers with challenging courses of study, but keeps them occupied with daily exercise, kit­ing and community service projects. Since wind conditions change with the seasons, the small school decamps to follow prime conditions around the globe. In Semester One they traveled from Oregon to Hawaii to Brazil. Semester Two began in South Africa, where the Red Bull King of the Air event was underway. Each destination becomes part of the curriculum. 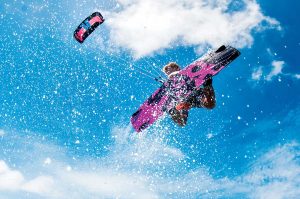 Raised in Turks & Caicos, Sean and Liam Karam developed a love of kiteboarding. The twins spent the past year traveling with the World Class Kiteboarding Academy headquartered in Hood River, Oregon.

Between their lessons and their kiting and the travel and the little practical tasks — like planning, shopping for and cooking their meals — the twins are doing better academi­cally than ever. “They are doing fantastic, and I don’t even have to shout at them,” Johanne said.

The boys are convinced they’re moving closer to their goal of becoming professional kiteboarders. The different conditions and styles they’ve encountered have already broadened their skills and prepared them for international competitions. But like kids everywhere, the twins are still making their way into a big, interconnected world.

“At the beginning we didn’t really know anyone, so we had to meet new people and become friends with everyone. But now they are kind of just like family,” Liam said. “Sometimes when we are there, usu­ally towards the end of our trip, we will start missing here.”

Adds Sean: “Towards the end of here, we start missing there.”